Well, this is awkward, isn’t it? I didn’t mean to leave you in a lurch for so long. I guess, as you can probably tell by the LOOKS of things, I’ve been quite busy behind-the-scenes.

When I started my blog in 2010, it was a very short term kind of thing. I didn’t think anyone would read it and I thought once I was done my little adventure that I would…well…actually I didn’t really think about what would happen after that. Seriously. I wrote the blog to hold myself accountable for the challenge I had taken on, to make all of the recipes in Jamie Oliver’s Food Revolution cookbook in 365 days. That was five years ago. Back then, while I was cooking and blogging and blogging and cooking I learned that people were actually reading my blog. The craziest part was that I didn’t know all of them. Strangers were reading my blog and  they were reading because I was a lot like them. I was the girl that didn’t really help out in the kitchen and then grew up and found herself standing in her own kitchen having no idea what to do. I needed to get food on the table for my family and I wanted it to be good food. I realize that I could have just taken a cooking class or done something else a little less dramatic but, I guess I decided to go big. The problem was that once I was done my Food Revolution challenge, I wasn’t really sure what to write about next. I quickly learned though that people wanted to keep reading. I still get notes and emails from people asking if I’m still writing. So, in a strange turn of events, I went from writing great stuff about not knowing how to cook TO knowing how to cook but not having great stuff to write about. This past March, when my five year blog-iversary hit, I realized that this little blog had been puttering along for five whole years and I needed to think about what was in store for it next. Did I keep it up? Quietly go off into the sunset?

What I realized is that a Food Revolution was still happening in my kitchen. I know how to cook now but I still have challenges that I am constantly working on. Better yet, I have things to say about those challenges. I also knew that there were moms (and dads) out there who are just like me five years ago and, it turns out, they still want to hear what I have to say. Also, since I’m one of Jamie Oliver’s Food Revolution Ambassadors now, I am completing new assigned challenges each month that I want to share. I really hope that I can inspire people to start a Food Revolution in their own kitchen.

So, this blog is getting a reboot. As you can see (since I don’t do anything tiny) a reboot comes with a whole new look. I have to give a big shout out to my new friend, Emily, at Designer Blogs who helped me create the look that I was envisioning but had no idea how to get on my own. Thank you, Emily!

I hope you’ll keep reading along and I hope you’ll get involved and tell me what you think. Don’t forget to click those cute little buttons up there and visit me on social media, it’s the best way to see what I’m up to and get a heads up when new blog posts come along.

This blog post is late. During our Food Revolution Meat Free week my plan was to tell you about one of my favorite meat free recipes…Jamie Oliver’s Spinach and Feta Filo Pie from the Meals in Minutes Cookbook. I was going to tell you how easy this recipe is and how Jamie says it is a great meal to make when you have company over for dinner. I remember the first time I made this being so proud of myself because it is quite impressive when it’s done and it makes you look like you pulled off some master chef skills in the kitchen. You can giggle to yourself knowing that it was really easy to make. That’s what I was going to tell you. But instead I’m going to tell you about how I ended up in Urgent Care. Because of my pie. With Second degree burns. On my typing fingers. Sniffle. Sniffle.
So, this awesome recipe begins in a pan on top of the stove with some pretty green baby spinach.

Then moves to the 400 degree oven.
I took the pan out of the oven just as my sweet husband was walking in the door. Since this is a pan that we usually use on top of the stove I wanted to make sure he knew not to touch the handle and that it had been in the very hot oven. So I said out loud, “Don’t touch the pan on top of the stove, it has been in the oven and the whole thing is really hot.” Not even a minute later, I don’t know what I was thinking, I grabbed the pan handle. It hurt. It really, really hurt. I cried. One spot especially started to blister up and I knew I needed to get some medical attention. So, off I went to Urgent Care.
Now, normally I would have some nice photos of my Spinach and Feta Filo Pie for you. But, I don’t have any photos of the beautiful pie. I was in Urgent Care with a doctor. But here’s a photo of what my family had done to it when I got home (I think they liked it):

If you’d like to make your own Spinach and Feta Filo Pie here’s the recipe. But, please be careful!
http://www.jamieoliver.com/videos/how-to-assemble-the-spinach-and-feta-filo-pie-from-30-minute-meals
XOXO,
Amy

This month, Jamie Oliver has challenged the Food Revolution Ambassadors to go Meat Free for one week, March 23-29. So starting tomorrow, whether they like it or not, my family will be going meat free. I have a couple of great recipes on tap to help us get through (this is a first for us) and I wanted to share them with you.

The first is a Food Revolution favorite, Vegetable Jalfrezi. Here’s a flashback to that blog post…

The second is a recipe from another Jamie Oliver cookbook, Meals In Minutes. This recipe is one my family also loves. Here’s a video on how to make it and I’ll be blogging about this one later this week…

And don’t forget to let me know if you try any of them out.

To celebrate the 5th anniversary of my blog, I made the first recipe from my Food Revolution Cookbook Challenge, Mini Shell Pasta with a Creamy Smoked Bacon and Pea Sauce (pg. 52). This is the recipe that started my journey, where I cooked 173 recipes in 365 days. I thought it would be fun to go back and read my first blog post on this recipe. First of all, that toddler that was crawling around by my feet is now in First Grade! I remember being so stressed to make this and thinking that it was so much work. Well, I think I’ve come a long way because making it again was so quick and easy. My family was shocked when a short 20 minutes after I started I called out that dinner was almost ready. The mint and the peas together make it a great spring time meal and how can you go wrong with bacon?
Here’s the link, go ahead, give it a try! 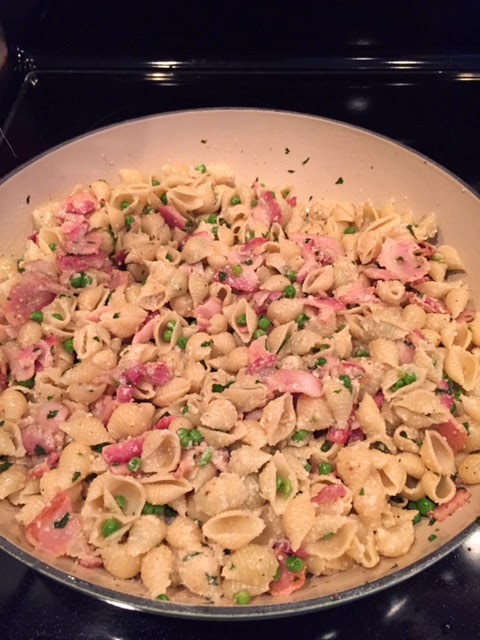 It was still February of 2010. I had made a resolution to cook more, had been inspired by Julie and Julia, picked out Jamie Oliver’s Food Revolution for my project but now was faced with the other part of this daunting task….The BLOG.
I felt like this part of it was even more intimidating than the cooking part, and that part worried me quite a bit! I knew that it was an important part of the project because I needed something to keep me accountable and I knew that if I started it, I would need to see it through. That is just how I am. Kind of the like how I’m still reading Sue Grafton’s murder mystery alphabet series even though I don’t really like murder mysteries and I don’t really care about what happens to Kinsey Millhone. I just need to get to Z. At the same time, who would read it if I did write a blog? How would I find time for all of those entries? And did I really want to put myself out there like that?  I really didn’t feel like I could pull this part of it off and had almost abandoned the idea all together…and then I went to visit my friends Johnny and Becky.
I had lunch with Johnny one day in late February and I knew once I told him my idea he would cue the instant pep rally. And he did! He loved the idea and he completely encouraged me to do it. Seeing him so excited made me even more excited. I also knew that if I didn’t get started he would be calling me to make sure I did.
Now if Johnny is the pep rally guy, then Becky is the action plan girl. When I came back from lunch with Johnny and told Becky she immediately jumped into her supportive friend role and most likely gave me a “All you have to do is….” speech. Becky is great at breaking up daunting tasks into manageable chunks to show you that you really can do it. I love when she does this! They are the best friends ever and getting this blog started is largely due to their awesome support and encouragement.
So, that afternoon I went home and started researching blog platforms and wrote my first blog post and a few days later, on March 3, 2010, Amy’s Food Revolution, was born.
Coming up next…
The Anniversary of my first recipe is up next and I’m making it again! My kids are so excited. It is one of their favorites and they can’t wait.

All of the thoughts and words here are mine and mine alone and do not represent Jamie Oliver, Jamie Oliver's Food Revolution or anyone else mentioned.